India's on a digital sprint that is leaving millions behind

India has more than 630 million internet subscribers. But for every Indian who has access to the internet, there is at least one who does not and that person is most likely living in a rural area. Smriti Parsheera writes on the country's continuing digital divide.

There is an exuberance around India's digital story.

The country is home to the world's second-largest internet user base, consisting of more than 630 million subscribers. That is more than the total population of the US, the United Kingdom, Russia and South Africa put together.

It also has the cheapest mobile data prices, which has allowed a large population to use the internet just in the last four years.

Besides the size of the pie, data consumption is also on the rise.

The average internet user now consumes more than 9GB of data per month. That translates to watching 16 hours of video a month compared to just 15 minutes in 2015.

Other positive trends include a competitive e-commerce market, a booming video streaming industry and a choice of affordable devices. 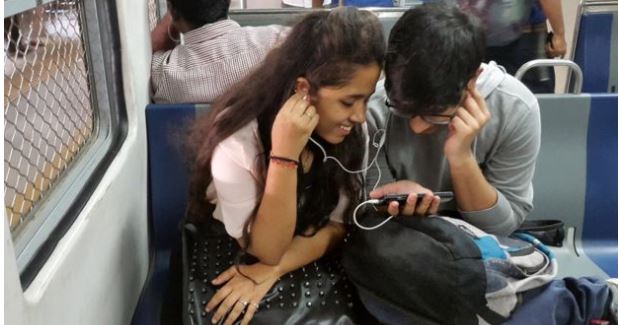 At the government's end, electronic governance, mobile health and digital finance are at the heart of many policy discussions.

All of this excitement is, however, surrounded by the sobering reality of India's continuing digital divide.

This refers to the gap between those who have access to the internet and other digital technologies and those who do not.

The divide is shaped both by the availability of internet services in different regions and the ability of individuals to tap into those services. A person's location, income, gender, education, language, and age are some of the factors that define their access.

As per data released by the Telecom Regulatory Authority of India, the country has an internet density of 48.4. This represents the number of internet subscribers per 100 people in the population.

Even though 66% of the country's population lives in its villages, rural internet density is just 25.3. In comparison, urban areas have a significantly higher density of 97.9.

This means that for every Indian who has access to the internet, there is at least one who does not and that person is most likely living in a rural area.

We see stark variations in the access levels across the country's 28 states and nine union territories. States like Bihar and Uttar Pradesh in the north and Orissa in the east are known to perform poorly on human development indicators, and they also fare badly in internet use density.

The availability of internet infrastructure is also affected by geographic conditions.

For instance, the remote mountainous areas of Himachal Pradesh, sparsely populated deserts of Rajasthan and dense forests in Madhya Pradesh face greater digital exclusion. It so happens that many of these remote locations are also home to India's tribal and marginalised communities. Poor connectivity can therefore unwittingly end up perpetuating existing disadvantages.

Gender is another important factor that shapes digital access. Only 16% of Indian women were found to be using mobile and internet services, a 2019 report from the GSMA, a body which represents mobile operators, said.

On a comparative scale, women were 56% less likely to use mobile internet than men. This situation stems from a mix of economic, social and cultural factors placed against the backdrop of a deeply patriarchal setup.

On the economic front, while data access charges have gone down drastically, the cost of internet-enabled handsets is still a barrier for many households.

The financial dependence of women and their lower position in the household pecking order naturally reduces the likelihood of them owning such devices. Besides ownership, lower literacy rates and digital awareness among women are some of the other limitations. Many of these factors also contribute to reduced access among the elderly population.

Digital empowerment is known to create greater awareness and independence, which may be perceived by some as a threat to the established social order.

This thinking has manifested itself in several reports about , particularly younger women.

Finally, when it comes to the educated classes, the issue shifts from that of basic access to the chronic under-representation of women in various ways. From online spaces to research labs to meeting rooms, India mirrors the global trend of digital technologies continuing to remain the primary domain of men.

The Indian government has not been immune to these problems. One of its flagship programmes, the Digital India project, identifies universal access to mobile connectivity as one of its main pillars.

The government is trying to achieve this by providing broadband connectivity to the country's 250,000 village councils. This project has been in effect from 2011 but so far a little less than half of that target has been achieved. The number of locations where the completion of the work has led to functional internet is even lower.

The government's National Digital Communications Policy acknowledges that much more effort is needed on this front.

It speaks about the need to bring connectivity to all under served areas and identifies specific groups, like marginalised communities, women and persons with disabilities that merit specific attention. The policy also lays emphasis on solving last-mile connectivity issues in both urban and rural areas, through the use of public Wi-Fi infrastructure.

The policy discourse is clearly moving in the right direction.

From broad claims about the need for universal access, it has evolved to recognise some specific factors, like location, gender, and marginalisation, that shape the digital divide.

What India needs next is for policymakers to undertake a rigorous data-driven exercise to measure which factors are causing what level of exclusion and the reasons behind it. Only when we fully understand the beast of India's digital divide can we design targeted solutions to tame it.